Carbon steel pans are known to be durable cookware that can last for many years. They are also very versatile and can be used to prepare many types of dishes.

When you buy the best carbon steel pan, you wouldn't need to buy another pan for the rest of your life if you will really take care of it. 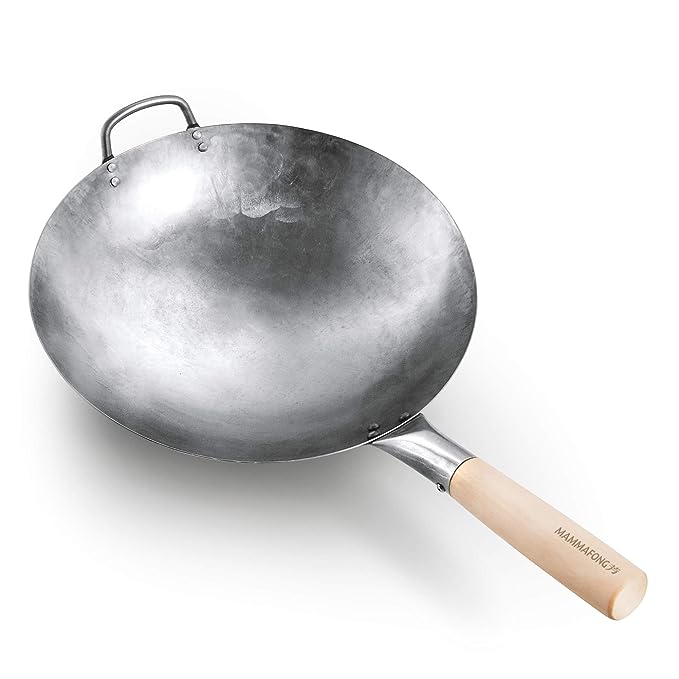 The wok is a versatile cooking implement that originated in China and is also used widely in other Asian countries. This wok from Mamafong is made with hand-hammered carbon steel making it durable and is designed to be used in professional kitchens.

In many Chinese homes, their woks last for decades and are handed down from one generation to the next. Because this Mamafong carbon steel wok is made to last, for sure your grandchildren will be cooking with it as long as you take care of it properly.

Unlike most pans today, this wok is not massed produced. It is crafted by hand by master craftsmen from Guangdong, China. So you can be sure that each wok is unique and has been made with care and passion.

With use, this wok will become naturally non-stick. Since carbon steel is a safe and non-toxic material, your and your health is ensured when you this to cook your food.

Like a true Chinese master chef, you can get effortless toss the dish you are cooking with confidence thanks to its long handle with a comfortable grip. It also has a helper handle that makes it easy to lift and store the wok. 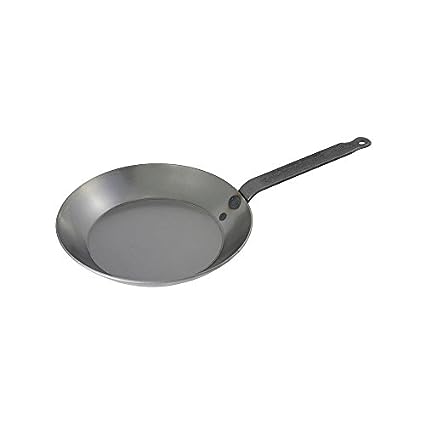 This carbon steel round frying pan from Matfer Bourgeat is designed for professional use. If it can stand up to the challenges of commercial use, imagine the value it will provide to an ordinary home kitchen.

Because of its size, it is perfect to use for cooking a wide range of dishes. You can cook almost every type of dishes in this pan: meat, fish, and even desserts.

When properly seasoned, the pan becomes more durable, and it turns into a non-stick pan. So after cooking, you just need to slide your dish onto the plate. This is a versatile pan. You can use it on all hob types. You can even use it on an induction cooker.

The extra strong steel strip handle provides comfort, convenience, and safety when cooking. The handle is also securely connected to the pan with a riveted attachment.

Despite its sturdiness, this pan is relatively lightweight and very easy to handle. It weighs just a little over 3 pounds so moving it around will not be a problem.

Because of its durability, this pan is also ideal for professional chefs who always need to lug around their tools. You don’t have to worry about warping or denting this pan. 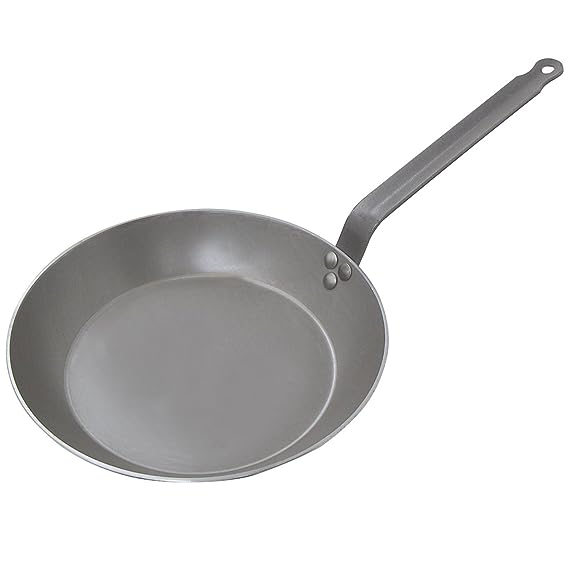 De Buyer is a French company that has been making quality kitchen tools and equipment for almost 200 years already. All of their products are proudly made in France. They care about customer satisfaction, so all of their products come with a limited 2-year warranty.

The solid French style handle is both sturdy and stylish. It is attached to the pans with unbreakable rivets so you can be sure that it will not become loose even after several years of regular usage.

This is designed for use on all types of stovetops, even on induction hobs. Dropping this pan will not cause it to have a dent because of its made of a robust iron material. It is a 22 cm pan so grilling meats and cooking vegetables will not be a problem. 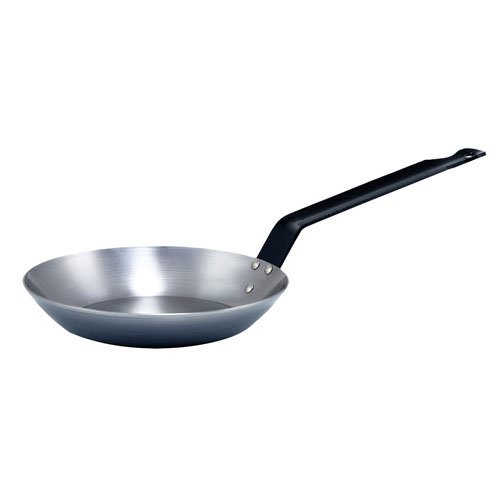 Complete and even cooking is ensured with this French style pan because of its curved side walls and a flat bottom. The side walls also prevent food from accidentally spilling when you are tossing or turning a dish.

Another ingenious design feature of this pan is its sloped side that prevents the accumulation of steam in the pan. Too much steam can make the food soggy.

This is a versatile pan that you can use to fry, sautee, sear, and more. The handles are attached to the pans by rivets and are not welded to ensure longevity and durability. Welded pans tend to break after years of regular use. 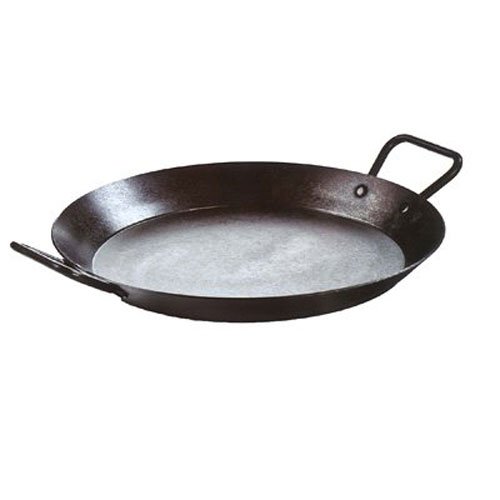 Lodge is an American brand whose name is synonymous with cast iron cookware. But they also make quality carbon steel pans like this 12 gauge skillet. The thickness of the skillet makes it effective at retaining heat for even cooking.

This is a versatile skillet that you can use on any type of stove including electric, gas, and induction stoves. It can also be used on open fire or outdoor grills when you go camping.

Like all Lodge cookware, this skillet is made to last for decades. Caring for it is easy. All you need to do is wash it by hand, dry it immediately, and then rub cooking oil on it.

The Benefits Of Buying The Best Carbon Steel Pan

The reason why many people choose carbon steel pans over cast iron ones is because the former is lighter. If you’ve used or at least held a cast iron pan then you know that it is like having a workout.

To make a pan or skillet, a lot of iron has to be used to make it durable and resistant to cracking.

Carbon, on the other hand, is not as brittle as iron. Carbon steel cookware hits the perfect balance between being too heavy and being flimsy. Still, some carbon steel pans are heavier than others.

There are carbon steel pans that are almost as heavy as cast iron ones. So you need to check the weight of the pan before you purchase one, especially if you are buying online.

A pan that is too heavy is hard to handle and control. Flipping eggs and other dishes would be virtually impossible with a very heavy pan.

Thickness is another important factor you need to consider when buying a carbon steel pan. Again, we’ll make a reference to casting iron cookware. The reason why cast iron pans are so effective is because of their thickness.

The thickness of the pan determines if the heat will be distributed evenly or not. Carbon steel may not be as thick as cast iron but they are decent enough when it comes to heat distribution.

One advantage of carbon steel - because it is thinner - over cast iron is its ability to heat up faster.

Carbon steel pans are also more responsive to changes in temperature. This makes it easier for cooks to increase or decrease the temperature when needed.

If you are cooking with a cast iron pan and you realize that you need to lower the heat, it will take some time before the iron pan will cool down to your required temperature. Since carbon steel is thinner and therefore has less mass, it is more responsive to shifts in temperature.

Cast iron pans may be effective and durable but admit it they look rather chunky. They seem out of place in a modern kitchen. Carbon steel cookware, on the other hand, looks sleek and very modern. Some even have a smooth and shiny finish.

When you have a brand new carbon steel pan, you will have the urge to show it off to people because of how good it looks.

Sooner though, carbon steel pans will turn black because of the layers of seasoning that it gets. This is why you should not be attached to the smoothness and shininess of a new carbon steel pan.

Like cast iron pans, carbon steel pans also need to be seasoned before the first use. With proper seasoning, both types of pans develop a natural non-stick coating similar to Teflon pans. The only difference is that cast iron and carbon steel pans are said to be safer than Teflon cookware.

Another advantage of carbon steel pans over cast iron ones is that it obtains the right level of seasoning faster. Some would argue though that seasoning in iron lasts longer than that of carbon steel.

Both cast iron pans and carbon steel pans have their share of advantages and disadvantages. When choosing between the two, you need to consider the type of food that you are planning to cook with your new pan.

It is worth mentioning that you should not use a cast iron or carbon steel pan to cook food that is acidic such as tomato sauce or wine. These foods will react to the metal and will give your food an acidic taste.

The clear winner among the carbon steel pans above is the Mammafong Authentic Hand Hammered Wok. It is versatile but is light enough to be used by even first time cooks.

And because it is hand-hammered, you can be sure that it lasts for many years. Maybe you can even hand it down to your children or grandchildren.

Loved this read? Feel free to share it and leave comments below!