Just so you know, many luxury restaurants have a collection of the best carbon steel woks not only for cooking Asian cuisines but also because woks offer utmost flexibility when it comes to cooking; especially cooking in high heat.

Just like most pans, woks need good seasoning before their first use. This is an important step to prevent early rusting and corrosion. We’ll go into this later in this article.

In this article, we’re going to show you the best carbon steel woks available for you to buy, as well as how you’ll be able to maximize their uses, and some factors to consider when it comes to choosing the right carbon steel wok for you.

The Joyce Chen 22-0060 - Pro Chef Flat Bottom Wok is a flat-bottomed wok measuring 14 inches in diameter and is ideal for both gas and electric ranges.

When we got hold of this wok, the first thing we noticed was it’s surprisingly lightweight. We’ve come across excellent carbon steel woks in the past, but this one has a few distinguishing features.

Second, the non-stick coating feature provides absolute convenience, plus the additional helper handle makes it easy to transport. It’s rather convenient, especially when you want to bring it with you during camping.

To do this, we scrubbed the wok using warm water and soap for a little more than five minutes. After that, we filled it with water to about two-thirds full. These steps are a fail-safe way to remove the protective coating altogether.

After those steps, we then season this wok using canola oil. Canola oil has a relatively high smoke point, which is precisely the kind of oil you’ll want to use when seasoning your wok. 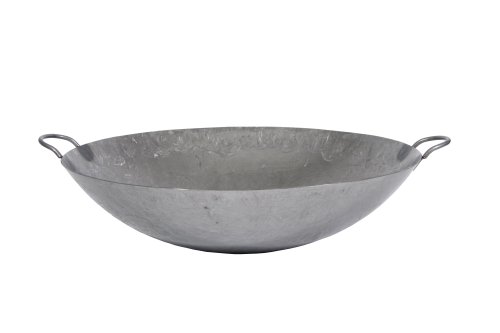 The Town Food Service 18-Inch Cantonese-Style Wok is a round-bottomed carbon steel wok that was cold-forged for added strength.

This wok is reminiscent of the ones used in old Chinese movies that feature fantastic cooking scenes. That is if you’ve watched such Chinese movies like us.

Don’t get fooled by its appearance. It may look like a regular wok, but it’s made of carbon steel, and in case you don’t know, cold-forging adds significant strength to any cookware, so this one’s absolutely built to last.

It’s not initially non-stick, but woks like this become so with regular use, and you can take our word for it. The handles are welded on this one, and they don’t look like they can be broken even when you hit them with a sledgehammer.

We’ve tried this wok for several cooking methods such as stir-frying, deep-frying, searing, and even just plain sauteing.

Its performance is quite remarkable. We’d like to believe that the exceptional taste of our food was partly due to this wok, although we can really cook, so it can be quite hard to tell.

Kidding aside, you don’t want to miss out in buying this wok, especially if you’re looking for an old-school kind of wok with a performance that is up to par with high-technology, modern woks.

Thanks to being cold-forged, you’ll be able to cook in relatively high temperatures using this wok and trust us when we say that it’ll never disappoint.

Just don’t forget to remove the protective coating and season it first.

The 14-Inch Carbon Steel Wok with Helper Handle (Flat Bottom) by M.V Trading is a flat-bottomed carbon steel wok that can sit directly on electric stoves or grills.

It’s made of unseasoned heavy carbon steel that was designed for rapid heating and cooling.

For a carbon steel wok, we must say that this one was relatively well-designed. The wooden handle and side spool handle did an excellent job during our high heat cooking session, as they allowed us to have full command of the wok.

The protective coating on this one is a bit thick though, so be prepared to allocate extra scrubbing time to remove the protective layer.

Thanks to being 4-inches deep, this one allowed us to cook large amounts of food. We easily cooked Hong Kong-style fried noodles for 30 persons with the help of this wok.

M.V Trading cautions that this wok needs to be seasoned first before use, which we did, but we want you also to keep that in mind, in case you order this wok.

We’re planning to cook a “wokful” of Chinese-style fried rice pretty soon, and we recommend that you try it out it too.

If you’re holding a party, make sure to use this wok as it can hold quite a bit of food! 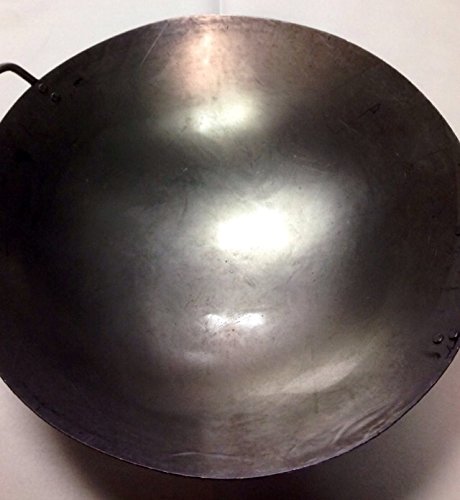 It’s a carbon steel wok with two loop handles that allows you to have a decent command of the wok during cooking sessions.

Much like the Town Food Service Cantonese-Style Wok, this one is a traditional-looking wok, with a performance that is up to par with modern woks.

This one has a thin protective coating that can easily be removed with around three minutes of light scrubbing.

Like with the other woks in this list, we’ve seasoned this one using canola oil, we can’t emphasize enough how important it is to remember to season a wok before using it.

Its round bottom makes it rather convenient to be used on gas stoves, and even makeshift stone or wood stoves during camping.

The carbon steel material allows for quick heating and cooling, and since you’ll be seasoning it before using it, this wok will become non-stick with regular use.

The only downside to this wok is that it doesn’t come with a ring, so you’ll have to purchase it separately. The ring will allow you to cook using electric and gas ranges.

Overall, this wok is one of the best carbon steel woks available in the market because of its sheer performance during cooking sessions. 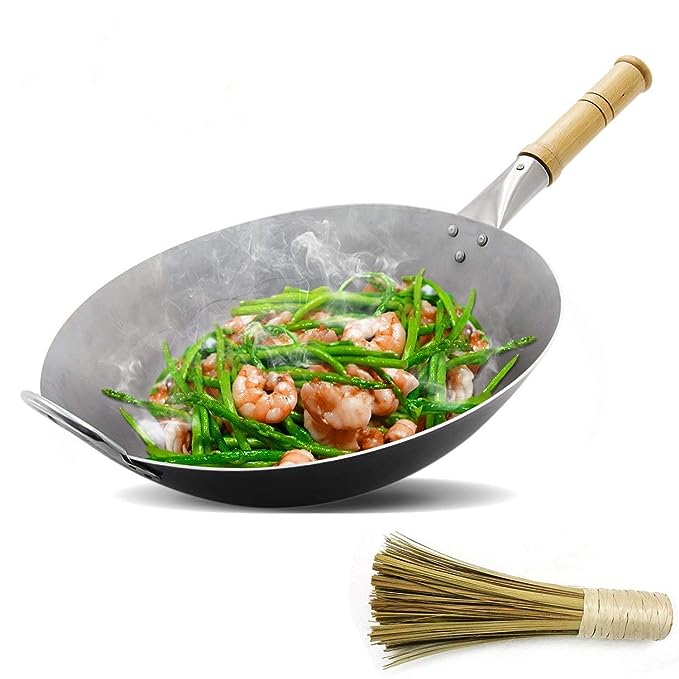 The Ieoke Chinese Pan with Wooden Helper is a hand-hammered carbon steel wok made of high-quality wrought-iron.

This wok is uncoated and non-stick. By uncoated, it means it doesn’t come with a non-stick coating and just relies on its smooth surface, and proper seasoning, to become non-stick.

We elaborated on this since we believe many might get confused about the “uncoated” label, and mistake it for not having a protective layer.

This wok, like any other wok, has a protective layer that needs to be removed before use.

The best thing about this wok is its rather simplistic appearance. It’s relatively well-designed, and the wooden helper ensures you have full command of the wok even when applying the most complicated cooking maneuvers, you know.

The thick bottom and thin wall structure distribute heat evenly, and its exceptional thermal conductivity allows you to save a significant amount of both precious time and gas.

Ieoke claims that the small number of beneficial iron elements dissolved in wok cooking can provide the iron elements needed by the body.

This wok performed great when we used it to cook some Asian seafood dishes and Yang Chow Fried Rice. The Ieoke Chinese Pan with Wooden Helper is one of the best carbon steel woks that you shouldn’t miss out!

Why Should You Use a Carbon Steel Wok?

There are certain advantages and benefits in cooking using a wok. First, they eliminate the need to cook with several different cookware. Second, they can hold quite a bit of ingredient, and last but not least, they’re useful for any cooking method.

But why carbon steel woks, specifically?

Carbon steel has essential advantages over other materials. The carbon gives the steel hardness and strength while being relatively inexpensive compared to other hard substances. This is the reason why most carbon steel woks are cost-effective.

Carbon steel woks are among the safest cookware to use. Carbon steel, unlike other metals like Aluminium and Nickel, doesn’t release toxins when heated on high temperatures, making it one of the safest options when it comes to cooking.

Carbon steel woks distribute heat a lot quicker than woks made of other materials. Their excellent conductivity allows you to save a significant amount of time and energy when cooking.

Besides having excellent conductivity, carbon steel woks also cool rapidly. This feature allows you to have better overall control when cooking. It enables you to regulate the temperature better and cook food much safer.

Factors To Consider In Choosing The Best Carbon Steel Wok

When it comes to choosing the best carbon steel wok for you, always make sure to consider all the added features.

Carbon steel, in general, is already advantageous and beneficial enough to use, but the ones with added features that provide more convenience are what you should go for.

Depending on your equipment, the choice between a flat-bottomed carbon steel wok and a round-bottom can be a bit challenging.

Each design has its own advantages and benefits, and it’s up to you to determine which one will provide you with more benefits and convenience.

When it comes to choosing the best carbon steel wok, size matters. It’s a crucial factor to determine. If you have money to spare, then you’re free to buy several carbon steel woks in varying sizes. But if you’re someone, like many others, who are keen about their budget, take the time to consider which size will be the most convenient to use for your situation.

Carbon steel woks are a useful addition to anyone’s cookware set. They are very versatile, and can be used for a lot of cooking methods, and even provide some added benefits when used for cooking. The Joyce Chen 22-0060 - Pro Chef Flat Bottom Wok tops our list of this year’s best carbon steel woks.

It’s relatively lightweight, and the added features will provide anyone with the needed convenience to make way for an excellent cooking experience. As an added bonus, here’s how you can take care of your carbon steel wok.

Check out our reviews for the best outdoor wok burners, too!

We hope you enjoyed reading this article! We’d love to hear from you, so please let us know if you have feedback or suggestions in the comments section!